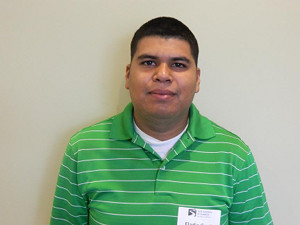 At the age of 24, Eladio Garcia joined the Army on a “spur of the moment” and that’s where he found his love for golf.

After his high school graduation Garcia enrolled in Richland Community College at his parent’s recommendation. After half a semester, he decided he wanted to do something else with his life. “I tried doing the whole college thing right when I got out, but I didn’t like it, so I enlisted,” he said.

Only nine months in the Army, Garcia found himself headed to Iraq. He was in the 4th Brigade, 1st Armored Division and in the Special Troops Battalion with the Alpha Company Agents. Garcia was an unmanned aerial vehicle operator. The UAVs he worked with were not combat-style, but rather for surveillance and battlefield intelligence. Garcia would control the camera on the UAV to help soldiers in the field.

Even though Garcia was not on the frontlines, he was aware he was in a war zone.

His first week in Iraq was frightening. “I just kept hearing these booms and my roommate said the base was getting bombed.” After two or three months he became accustomed to the noise. When the bombs got louder they headed to the bunkers for safety.

After nearly a year in Iraq, Garcia was sent to Fort Bliss in El Paso Texas. After four years in the Army, he decided to not re-enlist.

Instead, Garcia enrolled at the Golf Academy of America in Dallas and plans to become a golf instructor. He said he plans to obtain his golf complex operations and management applied business associates degree in December.

Garcia now spends his days on the golf course. He is enrolled in a rigorous program at the Golf Academy of America, which was voted as one of Military Advanced Education’s top military-friendly colleges and universities.

Garcia’s friend of 19 years, Jose Rodriguez, was taken aback when he found out his friend was attending a golf academy.

“It was surprising to me because we grew up playing soccer and baseball. I never knew he liked golf,” Rodriguez said. “I feel like he made the right decision by going to the Army because it taught him discipline and how to be responsible.”