When attempting to hole putts of a shorter length, two elements are extremely crucial.  The first is the ability to properly align the putter head and body with the intended target line.  The second is making a stroke that follows a proper path which matches the target line.

Unfortunately if one of these crucial elements is missing holing putts of shorter length becomes difficult to accomplish with regularity.

The good news is that one drill can address both of these critical elements.  Find a straight four foot putt and set two clubs on either side of the hole in a rail road track fashion.

Once the rails are set, use them as references for both alignment and stroke path.  When aligning the clubface, be sure it runs perpendicular with the rails, this will ensure the club is square with the target line.  As you can see in the picture there is not much space between the club head and the rails on either the toe or heel side of the putter.  When stroking the putt ensure the putter head is able to stay within the rails and immediately feel the solid contact.  By keeping the putter within the rails, know the stroke path and contact will become very positive and consistent, allowing one to master two critical elements for holing short putts.

Now that the technical aspect of holing short putts has been addressed, it is time to 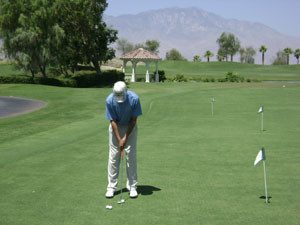 practice holing out under a little pressure, just like on the golf course.  In order to simulate a bit of pressure, set tees in a straight line away from the hole at distances of three, six and nine feet.  With three golf balls begin to putt from the three-foot tee.

The goal of the drill is to hole nine putts in a row, three from each distance.  If a putt is missed, start over from the three-foot tee.  This drill will force concentration, allowing for practice to become very similar to what is encountered on the golf course.

When you hole nine putts in a row pick up the tees and begin again from a different side of the hole.  By practicing with pressure and simulating the feelings encountered on the golf course it becomes much easier to make positive strokes when faced with these pressure packed putts during a round of golf.