The Northeast golf courses may not be in their peak condition in the early spring due to the inclement weather and dormant conditions they have just survived.  During this time of year there are several rules which often come into use.  Use them to your advantage and get out of trouble.

Conditions may be wet, golf courses may still have some fallen tree limbs or you may find your ball embedded; do you know how to proceed?  Here are just a few of the rules that you should know as they apply often on the golf course in the spring.  The situations I am presenting are for “through the green” which includes both the low mowed area “fairway” and the “rough” and, under the rules of stroke play competition where each competitor is playing against every other player in the field.

“Casual Water” is any temporary accumulation of water on the golf course that is not in a water hazard and is visible before or after the player takes their stance.  A ball is in casual water when it lies in or any part of it touches the water.  If you have evidence of this being the case, without penalty the ball may be lifted and dropped within one club-length of and not nearer the hole from the nearest point of relief.  Squishing noises do not count as casual water, the water must be visible. 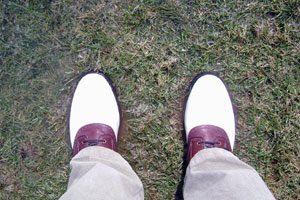 A stone, leaves, twigs and branches which may not be fixed or growing are natural objects referred to as “loose Impediments”.  These objects may be removed with no penalty.  However if the ball moves, you will incur a one stroke penalty and must replace the ball to the original position.  If you have started your back swing and then see that your ball is moving, keep swinging and strike the ball as there is no penalty once the swing has started.  You also have the option to deem you ball unplayable and under penalty of one stroke you may play a ball as nearly as possible at the spot from which the original ball was last played; drop a ball behind the point where the ball lay, keeping that point directly between the hole and spot on which the ball is dropped, with no limit to how far behind that point the ball may be dropped; or drop a ball within two club-lengths of the spot where the ball lay, but not nearer the hole. 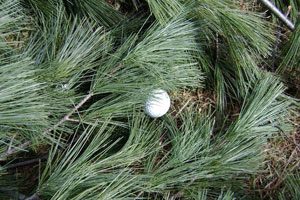 “Embedded Ball” is a ball that has embedded in its own pitch-mark in the ground.  The ball may be lifted, cleaned and dropped without penalty, as near as possible to the spot where it lay but not nearer the hole. 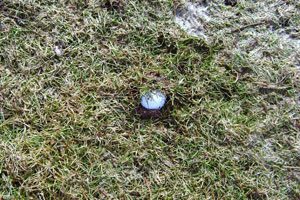 Snow piles may still exist on the side of a fairway or in the rough (remember this is through the green), and your ball lodges in a snow pile. Snow and natural ice, other than frost and dew are either casual water or loose impediments, at the option of the player.  You may play the ball as you would under the relief offered by casual water; remove the snow without moving your ball loose impediments; or, proceed under the unplayable ball rule.  A pile of manufactured ice emptied from a cooler is not considered casual water but rather an obstruction and one would have to proceed in accordance to the rules under obstructions. 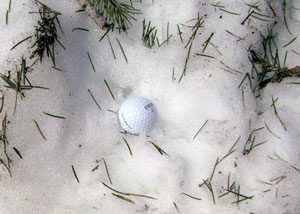 Local Rules may be made by the golf course committee where you play if local abnormal conditions interfere with the proper playing of the game.  Always check in club house as to what local rules may apply.