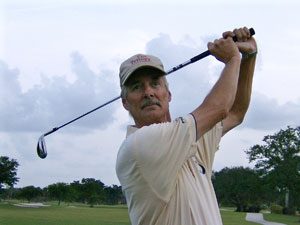 The “Mechanic” is unique to golf and easily recognizable.  We have seen him on every practice area and golf course we have ever played.  Frozen in suspended animation, he stands at address in stillness, contemplating the universe that is his swing.  He meditates on the takeaway, his position at the top, starting the downswing, impact, his extension through the ball and, alas, the finish position.

He is so absorbed in swing thoughts that his body cannot move to swing the club.  The Law of Inertia has won.  Locked in the mental mechanics of his swing he has, most likely, neglected all visualization of the ball flight or the target.  The rest of us just wait in awe and watch as the tension gathers in his mind and body.

The “Mechanic” is simply asking too much of himself.  The mind cannot deal with more than one thought during the one and a half seconds of an average swing time.  Any more than one thought is an overload.  The conscious mind short-circuits the subconscious into confusion.  It becomes unable to send a clear message to the body directing the swing in a unified motion.

The “Master Mechanic” is the exact opposite.  He has no swing thoughts of technique.  Instead, his mind fills the internal void with doubt and fear.  His mind clouds as his muscles contract.  He reverts back to that ugly shot on the last hole.  He is consumed with external images of what others will think if he hits another bad shot, which pretty much guarantees that he will.

Of course, we should develop proper swing fundamentals and build consistent muscle memory.  Yes, we do need to focus on distinct segments and issues within our swing.  Everyone’s swing is a personal evolution that should connect these dots.  It’s good to evaluate, critic and tweak adjustments, remembering that perfection is a rarity.  Discovery through experimentation is part of this game, too.

But at some point, particularly when we go to the golf course, it’s time to let go and trust in the productivity of our practice sessions.  Mental tension generates muscular tension, and tension ruins golf swings.  Part of playing well is learning to relax.  Golf is a game, after all.

To the “Mechanic” I can only say, “take a leap of faith”.  Stop thinking so much and swing the club with your body instead of you mind.  Learn to let go of the tension.  You cannot make it happen, you have to let it happen.  Try building a waggle into your pre-shot routine.  This keeps your body in motion and in touch with the weight, balance and feel of the golf club.

One of the things that makes golf unique among sports is that the ball is in play even when it is not in motion.  Tests have proven that it is more difficult to hit a stationary object that it is to hit one that is in motion.  We just have too much time to think about it instead of allowing our hand-eye coordination to help us react in a natural athletic way.  Other tests tell us that standing still over a golf ball more than seven seconds makes it more difficult to initiate the swing with a fluid motion.

The rules of golf prohibit striking the ball before it has come to rest, so there is nothing we can do about the first point.  But the rules, and etiquette, do not smile kindly on slow play either.  If the high handicap “Mechanic” spent five seconds less over the ball before every shot his score would most likely be improved.  The rest of us would suffer a lot less anxiety, too.  And finally, the round would be finished seven or eight minutes sooner and we could all be headed for that cold frosty one at the 19th hole.