Many players have a real challenge playing fairway bunker shots, but there are a few tips that can ensure you play good shots from this treacherous hazard.

Two common errors are made at address.  First, because the rules of golf prohibit a player from grounding their club in the bunker, many players will take their set-up and hold the club above the ground by bending their arms particularly the right arm for right handed golfers. 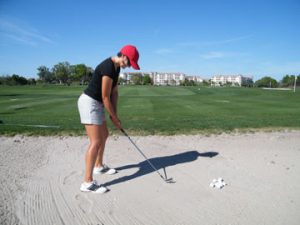 When you make this error you are setting yourself up to bottom out your clubhead before getting to the ball because your arms will lengthen and extend as a result of centrifugal force during the downswing and lead to a heavy or fat shot. 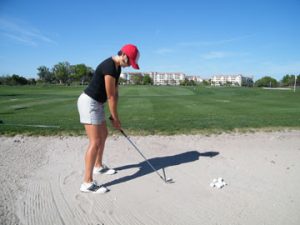 The correct set-up has the right arm fully extend while holding the clubhead just above the sand in order to ensure your arms do not get longer during the downswing. 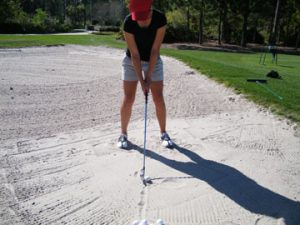 The second common set-up error is playing the ball too far forward.

the forward heal.  So in order to further ensure that you contact the ball and then sand to producing a crisp hit, you need to play the ball one or two balls back of your normal position or nearly centered in your stance.  To further promote ball first contact, you may also want to experiment with keeping a bit more weight on your left side.  Start out by trying 55% of your weight on your left side and adjust from there. 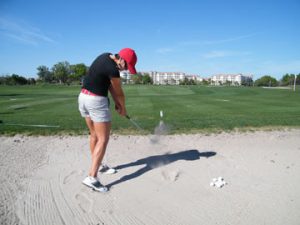 Another common error occurs in the swing itself.  In an attempt to lift the ball out of the bunker, or as a result of poor swing path, players will lift their spine angle and stand up. To make consistent strikes you must practice maintaining the spine tilt that you had at address throughout the swing.

Lastly we commonly see errors in shot selection which occur during planning.  Players either underestimate the loft needed to clear the bunker lip because they are not willing to accept that they can not get to the green, or they underestimate how much shorter the ball may fly from the fairway bunker and don’t use enough club to hit the shot. 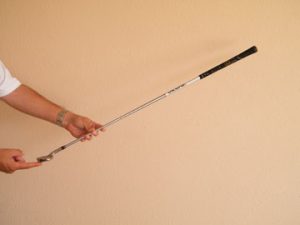 For the second mistake it is a good idea to take one more club than normal to ensure the sand contact doesn’t leave you short of your target.

If you follow these simple tips you will win the game with the fairway bunker.